Version 4.4 includes hundreds of improvements to existing features, and new features designed to bring additional ease of use, value, and operability to our loyal Sippy Switch Operators.

Switch operators can download SIP logs for successful and failed calls based on the SIP Call-ID header, making troubleshooting investigations much easier. 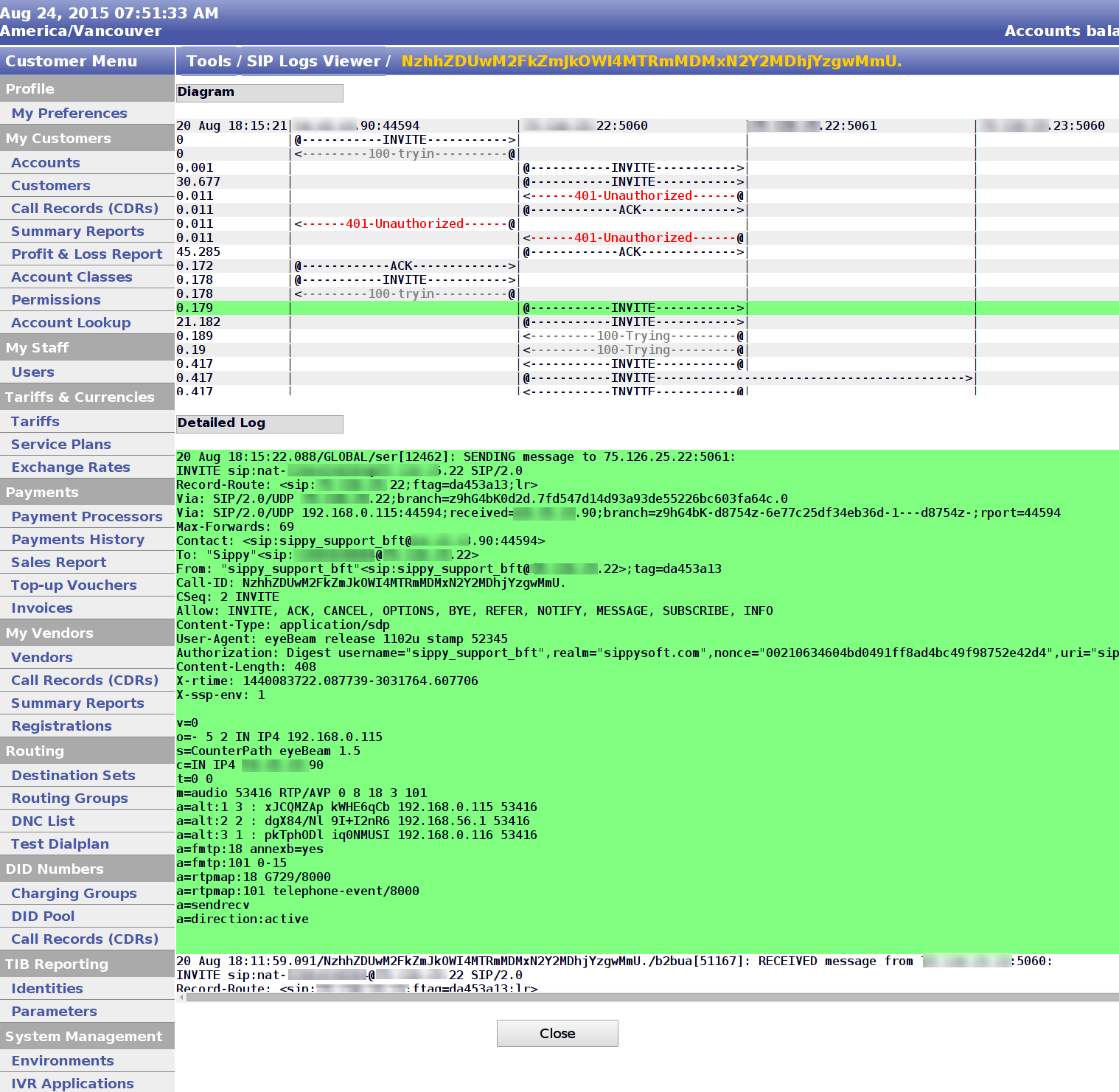 Each Environment maintains its own sip.log file. Previous to this change, all environments logged to a single file. Logs are located in /var/jenv{N}/var/log/sip.log where {N} represents the Environment id. This separation of log files permits operators to control indexing of sip.logs on a per-environment basis, making logs more manageable on busier systems. SS-237

SIP Log Indexing is configurable in System Parameters, and defaults to disabled. Operators must explicitly enable the feature.

The SIP Extract tool relies on a sip.log indexer which enables fast SIP Log extraction. The indexer introduces a small proportion of CPU and Disk load. For operators who run their switch at the edge of their servers capacity, the indexer can be disabled. When the indexer is disabled, the SIP Log Viewer will use a naive extraction method much slower than the Indexed method. The recommended configuration is to enable SIP Log indexing ‘is enabled’.

When changing the SIP Log Indexing System Parameter, the operator is prompted with a warning explaining the consequence of the action. SS-845

The Sippy Web application is available in the following languages:

DNCL (Do Not Call Lists) module

The DNCL module now supports international numbers, making it useful for calls to countries outside of the North American Dialing Plan (NANPA). DNCL can be enabled or disabled on a per account basis.

The DNCL module is a paid-for module. Contact sales@sippysoft.com for details.

This feature enables switch operators to present a custom SIP domain/realm to their vendors. The default behavior is to only present the IP address of the switch. Vendor realms are configured on a Vendor Connection basis.

This feature enables switch operators to present a custom SIP domain/realm to their client equipment via the Trunk feature. The default behavior is to present the IP address of the switch. Custom Realm/Domains are configured on the Trunk edit screen.

The Incoming Routing feature on Accounts can now be managed via two new XML-API:

This feature is in preview status. SS-16

A new CDR viewer is available specifically for DID’s. The new interface is available under “DID Numbers -> Call Records (CDRs)”

DID Delegation to Customers for resale purposes

Switch operators that maintain Customer records to resell VoIP services can now also offer DIDs to their resellers using the DID Delegation feature. The Switch Operator can purchase DIDs from a DID Supplier, and import the DIDs into the root his/her environment. The Switch Operator can then delegate one or more DIDs to a Customer record. The Customer to whom the DID has been delegated to, can then further assign that DID to his/her accounts, thus opening up a new revenue stream.

The DID Delegation functionality is managed either via the DID Pool section in the Sippy Switch web application or by several new XML-API methods.

When a customer has a DID delegated from a parent environment, the Customer can assign that DID to an Account in the same environment, or the DID can be delegated again to another sub-customer. Delegated DID vendor information is not configurable or visible to Customers.

CDRs are generated at all stages of the DID delegation chain.

New and updated XML-API methods to manage DID Delegations.

Documentation for these methods can be found on the Sippy support website: DID Management

The DID Pool interface will now prominently warn the operator of Spam over Internet Telephony “SPIT” risks when adding DIDs without specifying a Vendor Connection. SS-993

The CPS management limits have been improved to enforce limits immediately in both low and high CPS use cases. In previous versions, a sampling window was used to measure CPS. This could lead to a spike of CPS in the first part of the window, allowing for CPS limits to be exceeded for small periods of time. The old feature was also not very useful for scenarios where CPS limits need to be very low. Switch operators can configure CPS limits using decimals. Setting CPS to 0.5 would mean that the limit will permit only one call every two seconds. SS-1113

A new ‘On Billing Failure’ setting ‘Block All Calls’ has been introduced, and the previous behaviour represented as ‘Block Calls’ has been renamed to ‘Block Charged Calls’. SS-1073 SS-1075

The 4.4 release now generates audit logs for all XML-API methods that creates, updates or deletes data (read methods do not produce audit logs).

Notable areas that do not produce audit logs via the web application are:

Of additional note, the following other actions generate an Audit Log records:

The same rounding settings are also configurable on the Service Plan for customers. SS-1046

Audit Logs are available via the ‘System Management > Tools’. This feature will be moved to the main menu when all web actions produce Audit Logs. SS-624

Audit Logs are retrieved via the XML-API allowing for audit logs to be queried from external systems such as monitoring applications, dash-boards or security systems.

Documentation for these methods can be found on the Sippy support website: Audit Logs

SDP packets can be recorded for each call, allowing the switch operator to track and analyze which codecs are negotiated between endpoints.

The Record SDP system parameter is used to enable recording of SDP. The data is recorded to database, and is accessible on the CDR Detail Page, or via a new XML-API method named getCDRSDP(). This setting defaults to off, SS-642 SS-656 SS655

The Account/Customer CDR detail page displays all available CDR fields, including User-Agent, Post Dial Delay, Asserted-ID, and price calculations. This page will also display offered SDP if SDP Recording is at the time in which the cdr was produced. SS-606 SS-656

The CDR Details page is accessible from the “My Customers -> Call Records (CDRs)” CDR list view by clicking the small arrow in the first column.

The same functionality will be added for Vendor CDR detail page in a future release. 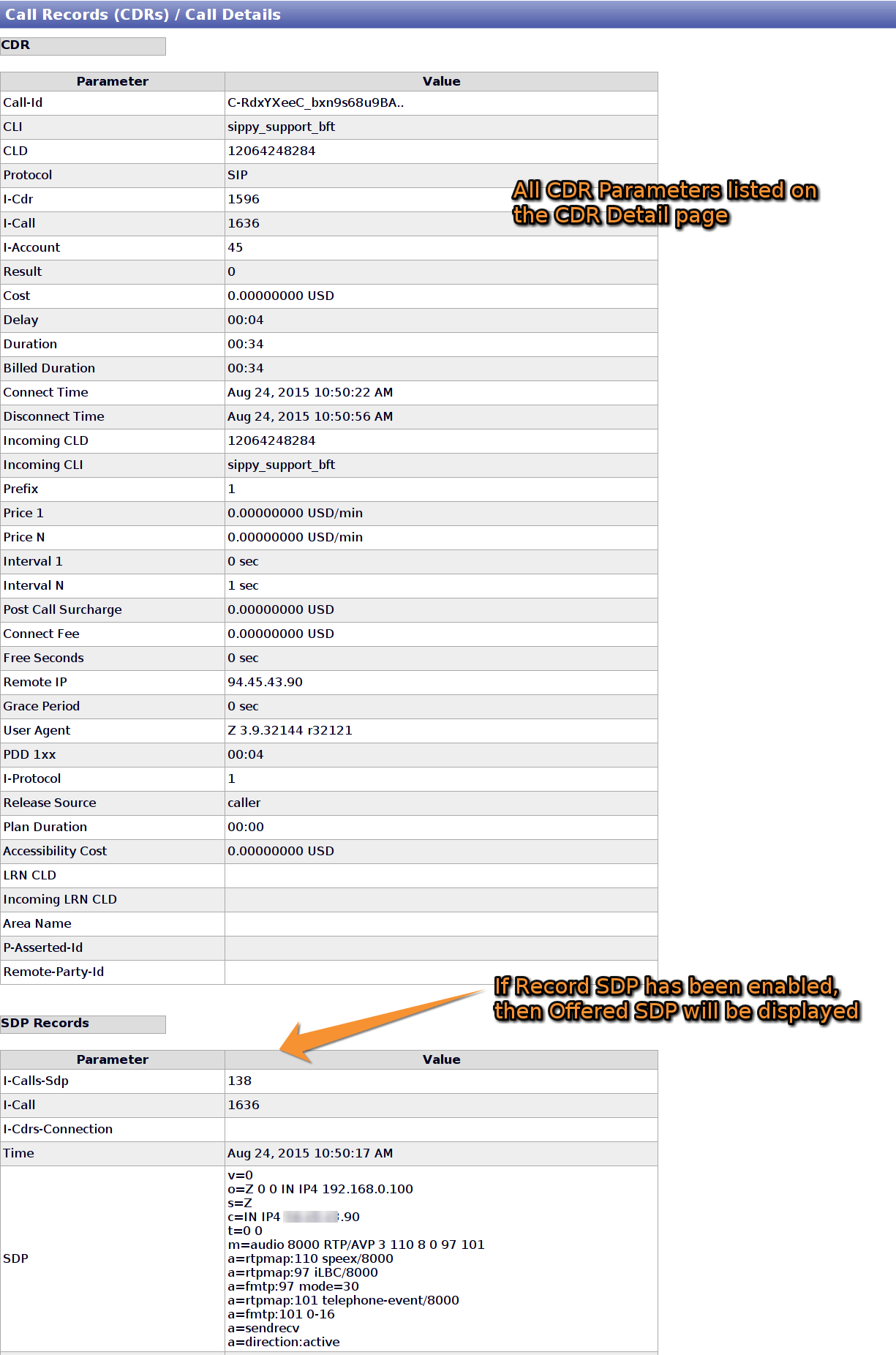 Apache threads now scale based on the number of concurrent calls and CPS assigned to a given environment. The auto scaling can also be overridden with a fixed number for special cases, such as higher than typical XML-API traffic. The configuration parameter is available on the Environments edit page.

API Consumers can now make use of XML-RPC multicalls to significantly speed up performance when performing more than one API request at a time.

Replication status can be queried using the new XML-API methods:

These methods are useful for operations teams to build richer monitoring dashboards for their Sippy Switches.

Documentation for these methods can be found on the Sippy support website: Replication Status Methods

The sippy media gateway includes improvements in terms of performance and reliability. The clustering technology has undergone extensive load and regression testing.

The web-based firewall rule user interface was limited to 50 rules. This has been increased to 500. SS-1015

The firewall user interface will be improved in future versions.

The Supported release for version 4.4 is FreeBSD 10.1-p11. FreeBSD 10.2 is optionally available, and will be the standard operating system for new and upgraded systems during Fall 2015.

The FreeBSD 9 series is not supported for version 4.4. Sippy operators wishing to upgrade to Sippy 4.4 will have the base operating system upgraded to FreeBSD 10.1 or 10.2

Apache httpd has been upgraded to version 2.4, and the base configuration tracks Mozilla’s “intermediate” TLS recommendations. SS-647

PostgreSQL 9.1 is the supported database version for the Sippy 4.4 release. A database upgrade will be required for clients running older versions of PostgreSQL.

The following PostgreSQL database settings have been increased:

The Python virtualenv utility now ships pre-installed. This is useful for clients who wish to install python modules/scripts in a home directory, without interacting with the OS package manager. SS-897

Eight spelling mistakes in the Sippy Web interface have been corrected.

A new web user called “sippy-support” exists in version 4.4. This user is used by Sippy Support for remote assistance purposes. Previous to this version, Sippy used the ssp-user for remote assistance purposes. The use of this account is also recorded in the switch’s Audit Logs, making Sippy’s support role transparent to all switch operators. SS-540